Stay up to date with insights into the global and local Australian economy.
Australian Economy 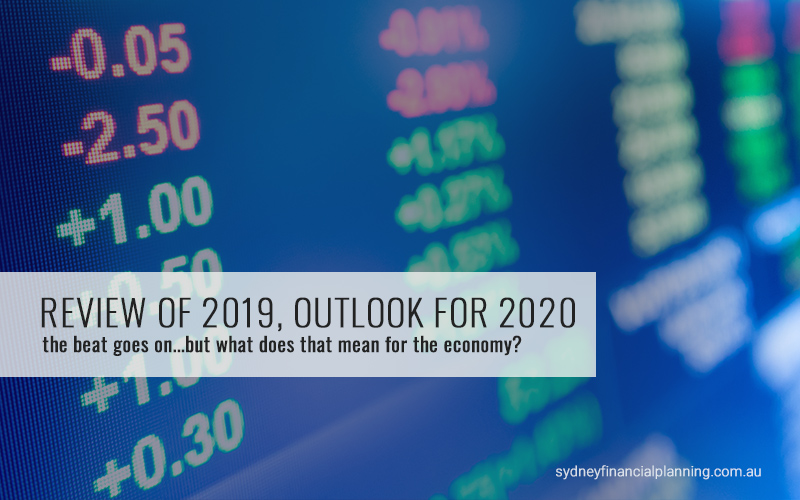 Christmas 2018 was not a great one for many investors with an almost 20% slump in US shares from their high in September to their low on Christmas Eve, capping off a year of bad returns from share markets and leading to much trepidation as to what 2019 would hold. But 2019 has turned out to be a good year for investors, defying the gloom of a year ago. In fact, some might see it as perverse – given all the bad news around and the hand wringing about recession, high debt levels, inequality and the rise of populist leaders. Then again that’s often the way markets work – bottoming when everyone is gloomy then climbing a wall of worry. The big global negatives of 2019 were:

But it wasn’t all negative as the growth slowdown & low inflation saw central banks ease, with the Fed cutting three times and the ECB reinstating quantitative easing. This was the big difference with 2018 which saw monetary tightening.

Australia also saw growth slow – to below 2% - as the housing construction downturn, weak consumer spending and investment and the drought all weighed. This in turn saw unemployment and underemployment drift up, wages growth remain weak and inflation remain below target. As a result, the RBA was forced to change course and cut interest rates three times from June and to contemplate quantitative easing. The two big surprises in Australia were the re-election of the Coalition Government which provided policy continuity and the rebound in the housing market from mid-year.

While much of the news was bad, monetary easing and the prospect it provided for stronger growth ahead combined with the low starting point resulted in strong returns for investors. 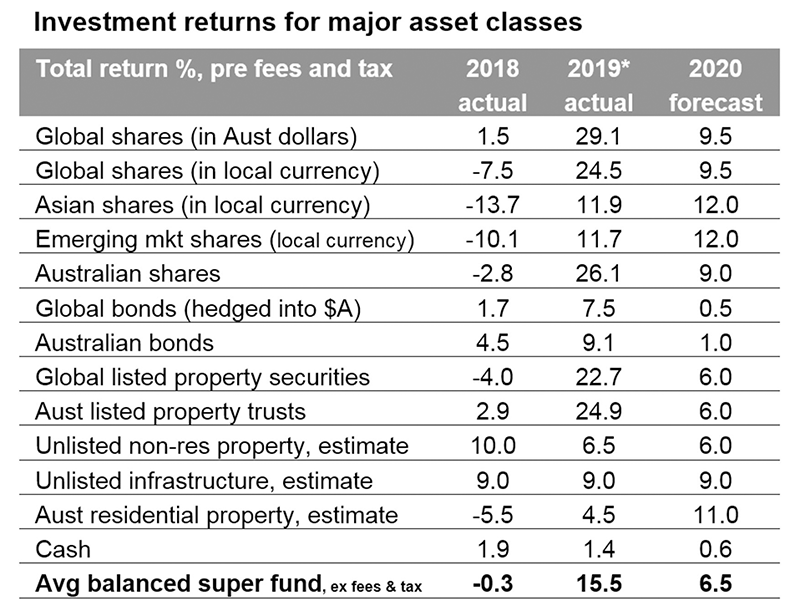 The global slowdown still looks like the mini slowdowns around 2012 and 2015-16. Business conditions indicators have slowed but remain far from GFC levels. See next chart. 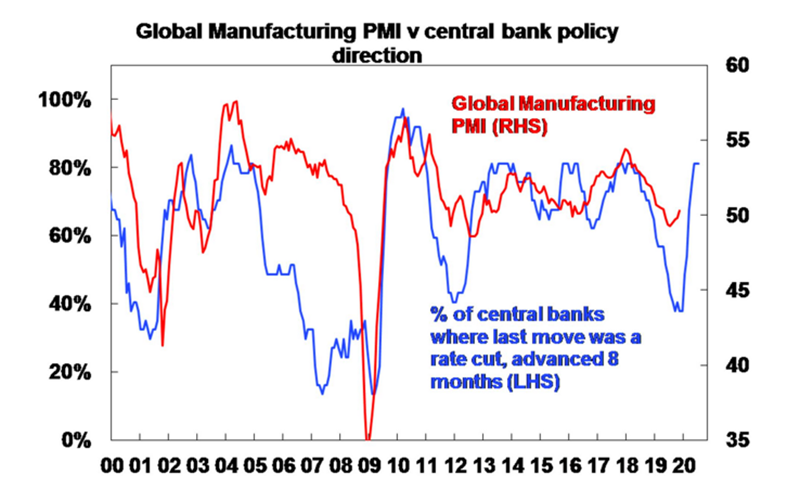 While the slowdown has persisted for longer than we expected – mostly due to President Trump’s escalating trade wars – a global recession remains unlikely, barring a major external shock. The normal excesses that precede recessions like high inflation, rapid growth in debt or excessive investment have not been present in the US and globally. While global monetary conditions tightened in 2018, they remained far from tight and the associated “inversion” in yield curves has been very shallow and brief. And monetary conditions have now turned very easy again with a significant proportion of central banks easing this year. See chart. The big global themes for 2020 are likely to be:

In Australia, strength in infrastructure spending and exports will help keep the economy growing but it’s likely to remain constrained to around 2% by the housing construction downturn, subdued consumer spending and the drought. This is likely to see unemployment drift up, wages growth remain weak and underlying inflation remain below 2%. With the economy remaining well below full employment and the inflation target, the RBA is expected to cut the official cash rate to 0.25% by March, & undertake quantitative easing by mid-year, unless the May budget sees significant fiscal stimulus. Some uptick in growth is likely later in the year as housing construction bottoms, stimulus impacts and stronger global growth helps.

Improved global growth and still easy monetary conditions should drive reasonable investment returns through 2020 but they are likely to be more modest than the double-digit gains of 2019 as the starting point of higher valuations and geopolitical risks are likely to constrain gains & create some volatility:

The main things to keep an eye on in 2020 are as follows:

Over time and studying economics for over 120 years, we've seen times like this before and what usually happens; is the rich get richer and the poor get poorer.

The reason why? the rich can borrow money cheaply and can afford to borrow at low cost. Sadly the poor cannot and are forced to sell assets cheaply. Unfair as this is, it’s our job to use this knowledge to help our clients build wealth.

Now more than ever it’s important to have an ongoing advice relationship with an experienced Financial Planner. Make sure you're having your regular review with one of our experienced planners and start taking advantage of the knowledge we have to help build wealth.

Happy New Year to all our clients and hang onto your hats for yet another interesting investment year.

Bill Bracey and the team.

Have you set things up to weather this trend?

If you need your personal situation reviewed by your SFP Planner or you don't have a planner yet, get in contact with us on 02 9328 0876.