Stay up to date with insights into the global and local Australian economy.
Global Economy

From goldilocks to taper tantrum 2.0 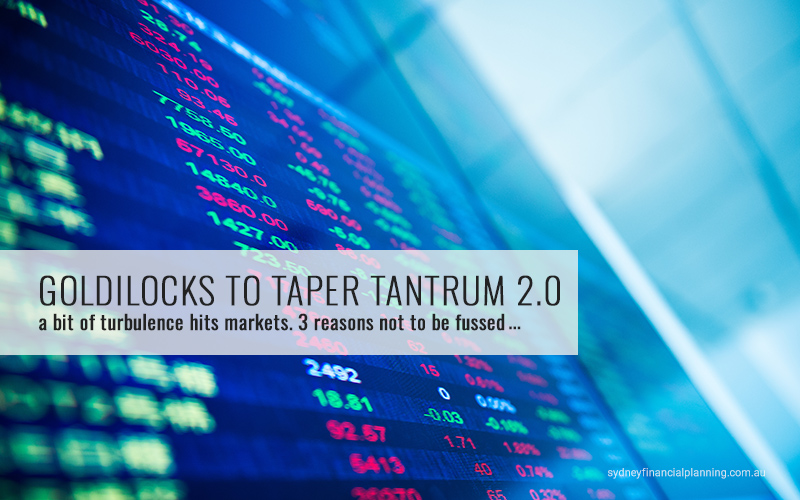 ...a bit of turbulence hits markets. 3 reasons not to be fussed - following are some key points:

For much of this year, there has been a surprising divergence between share and bond markets with shares up in response to improving growth and bond yields down in response to weak inflation. Some feared that either bonds or equities had it wrong, but in a way it seemed like Goldilocks all over again – not too hot (ie benign inflation) but not too cold (ie good growth). However, the past week or so has seen a sharp back up in bond yields – mainly in response to several central banks warning of an eventual tightening in monetary policy. Over the last week or so, 10 year bond yields rose 0.2-0.3% in the US, UK, Germany and Australia. This may not seem a lot but when bond yields are this low it actually is – German bond yields nearly doubled. This caused a bit of a wobble in share markets.

The big question is: are we seeing a resumption of the rising trend in bond yields that got underway last year and what does this mean for yield sensitive investments and shares? Since central banks are critical in all of this we’ll start there.

The action over the last week or so was largely driven by a somewhat more hawkish tone from key central bankers:

The last three basically signalled that thought is being given to an exit from ultra easy monetary policy. In the face of such seemingly synchronised comments, it’s little wonder bond yields rose. Perhaps the most significant was the shift in tone by Mario Draghi – with overtones of former Fed Chair Ben Bernanke’s indication in mid-2013 that the Fed will start phasing down (or tapering) its quantitative easing (bond buying) program. This saw bond yields back up and shares fall around 8% and became known as the “taper tantrum”. So maybe the current episode is “taper tantrum 2.0”.

Bonds and shares are a bit vulnerable to a correction

The rally in bonds this year had arguably gone a bit too far and positioning had become excessively long and complacent leaving them vulnerable to a rebound in yield that we are now seeing. Similarly, we have been concerned for some time that global shares are vulnerable to a correction given solid gains in most markets for the year to date and high levels of short-term investor optimism and complacency on some measures. As we have seen over the last week, worries about central bank tightening have provided a potential trigger. And this could have further to go if bond yields continue to back up sharply.

Three reasons not to be too fussed

However, there are several reasons not to be too concerned.

First, the shift in the tone of central bank commentary just matches the improvement seen in global growth and the receding risks of deflation, so it is actually good news. Global business conditions indicators (or PMIs) are strong (next chart), the OECD’s leading economic indicators have turned up, jobs markets have tightened and global trade is up. 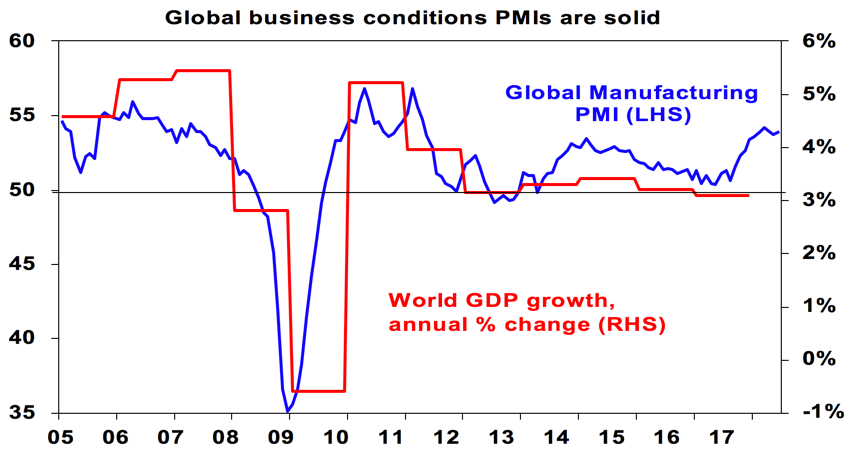 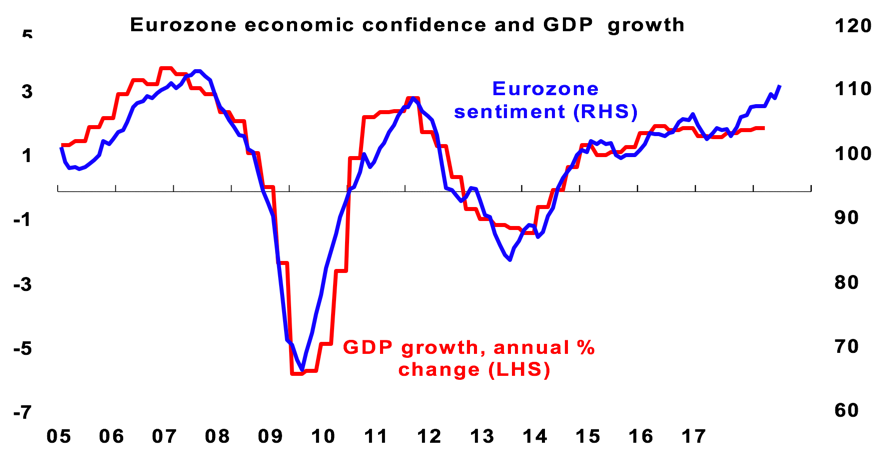 In particular, Eurozone economic confidence readings – both for consumers and business – are strong and at their highest in nearly a decade (see the next chart). So it makes sense for Mario Draghi to sound a bit more upbeat. If growth relapses, easy money exit talk will pause or fade too – much as we have seen in the US at various points over the last four years. 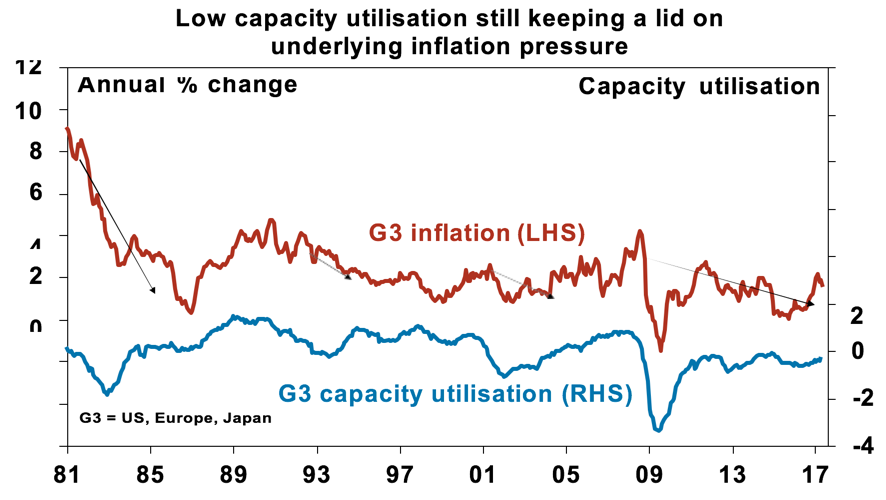 As a result of these cyclical and structural factors, corporate pricing power and wages growth remains weak just about everywhere. The lack of significant inflation pressure will keep central banks gradual as we have seen with the Fed over the last four years since the taper tantrum of 2013:

Finally, even though global monetary policy has gradually tightened thanks to four Fed hikes over the last two years, it’s a very long way from tight levels that will bring the bull market in shares to an end. As such – barring an exogenous shock – this global growth cycle and bull market in shares will likely remain long and drawn out.

At the time of the 2013 taper tantrum, there was much fear that an end to US money printing would lead to a major bear market, send bond yields sharply higher (as one source of bond buying dried up) and imperil the US and global economy. In the event it was a bit of a non-event as shares resumed their uptrend and the global economy continued to recover. The same is likely to be the case with the latest taper tantrum:

Exiting from ultra easy money not the end of the world

Finally, for those who say that central banks can never exit money printing and zero interest rates – just look at the US! Over the last four years, the Fed has phased down and stopped money printing or bond buying, raised interest rates four times and announced that it will start allowing its bond holdings to run down by phasing down the rolling over of maturing bonds in its portfolio. Each of these moves have caused uncertainty but have not crashed the US bond market, shares or the economy. Other central banks are likely to follow the Fed model.

Important note: While every care has been taken in the preparation of this article, AMP Capital Investors Limited (ABN 59 001 777 591, AFSL 232497) and AMP Capital Funds Management Limited (ABN 15 159 557 721, AFSL 426455) makes no representations or warranties as to the accuracy or completeness of any statement in it including, without limitation, any forecasts. Past performance is not a reliable indicator of future performance. This article has been prepared for the purpose of providing general information, without taking account of any particular investor’s objectives, financial situation or needs. An investor should, before making any investment decisions, consider the appropriateness of the information in this article, and seek professional advice, having regard to the investor’s objectives, financial situation and needs. This article is solely for the use of the party to whom it is provided.