Stay up to date with insights into the global and local Australian economy.
Economy 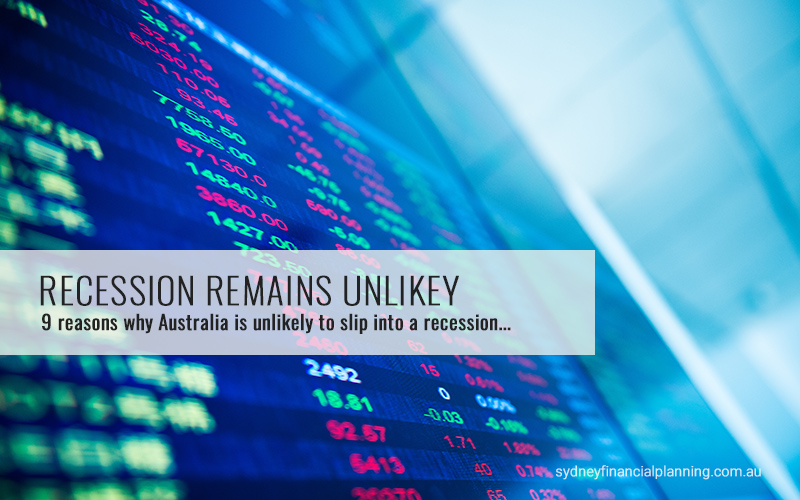 Australian economic growth has slowed to the weakest since the GFC. Talk of recession remains all the rage. And economists don’t have a great track record in predicting recessions globally – with an IMF study finding that of 153 recessions seen in 63 countries around the world between 1992 and 2014, economic forecasters only predicted five in April of the year before they started - so why should they pick one this time? As someone who forecast two of the last one recessions in Australia I am a bit wary. Perhaps the best way to predict recessions would be to forecast one every year and then you would have a perfect track record in predicting them! Some actually do this. But they are totally useless because they miss out on the 90% or so of the time that countries are not in recession and the positive lead this provides for share markets and other growth assets.

Recessions come along when there is a shock to the system (usually high interest rates), invariably at a time when the economy is vulnerable after a period of excess (such as rapid growth in spending, debt or inflation). The shock causes a loss of confidence, lots of little spending decisions are delayed and excesses are unwound. But given the natural tendency of most economies to grow given population growth and new innovations, increasing economic diversity, counter cyclical economic policies and the rise of the more stable services sector recessions are relatively rare at around 10-12% of the time globally. In Australia the last one was 28 years ago.

Why there has been no recession for 28 years

The absence of an Australian recession – whether defined by two quarterly GDP contractions in a row or negative annual growth - for 28 years is instructive. Many forecast recessions at the time of the 1997-98 Asian crisis, 2000-2002 tech wreck, the GFC and from around 2012 as the mining investment boom ended. But it didn’t happen. There are seven reasons why:

But is our luck running out?

June quarter GDP growth was just 0.5%. And annual growth has fallen to 1.4% which is the slowest since the GFC and below population growth of 1.6%. Housing and business investment fell, and consumer spending remains very weak. Were it not for public spending and net exports the economy would have gone backwards in the June quarter. 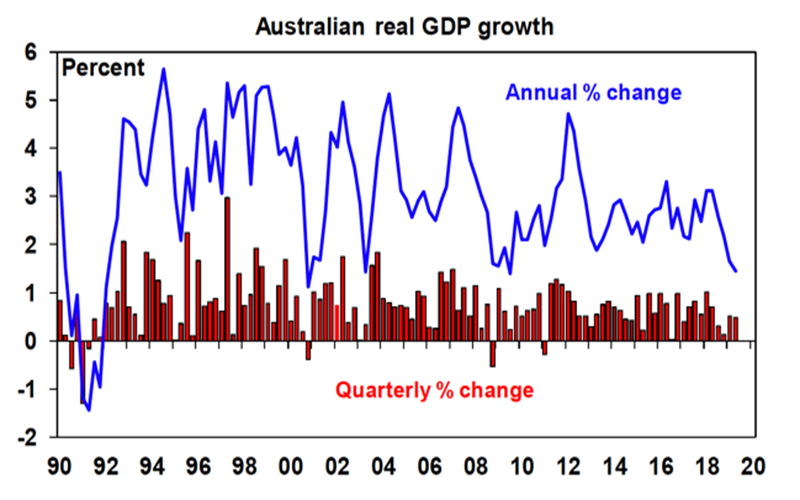 Going forward, the housing downturn has further to run with building approvals pointing to a further fall in home building. 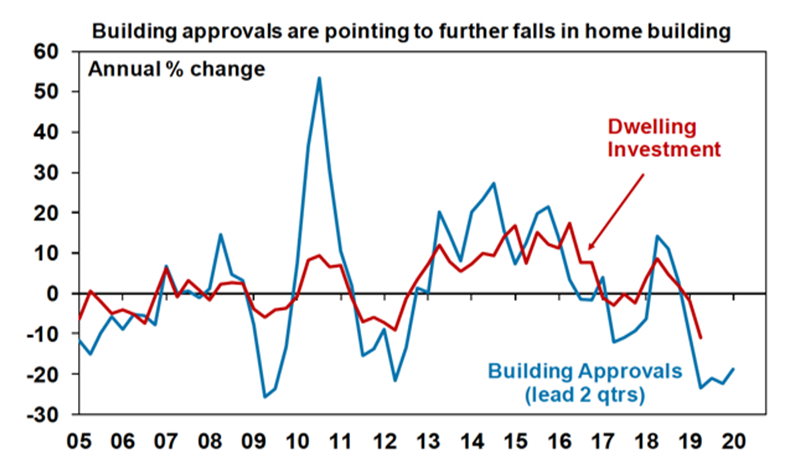 This is likely to amount to a 0.5-0.6 percentage point pa direct detraction from growth. This along with low property turnover (less people moving) and lagged negative wealth effects from the earlier fall in house prices will all act as drags on consumer spending. In total the housing downturn is likely to detract around 1-1.2 percentage points from growth in the year ahead.

The drought will likely also act as an ongoing drag on growth with a “mild” El Nino hanging around although this may be modest at around a 0.2 percentage point growth detraction. The threats to global growth from trade wars also suggests downside risks to export growth.

The weakness in relation to the economy is clearly evident in soft profit results in the recent June half year profit reporting season. The ratio of upside surprise to downside was the weakest since 2009, only 58% of companies saw profits rise from a year ago and the proportion of companies raising or maintaining their dividends fell to the lowest since 2011 suggesting a lack of confidence. Earnings growth slowed to 1.3% and excluding resources stocks was around -2.4%. 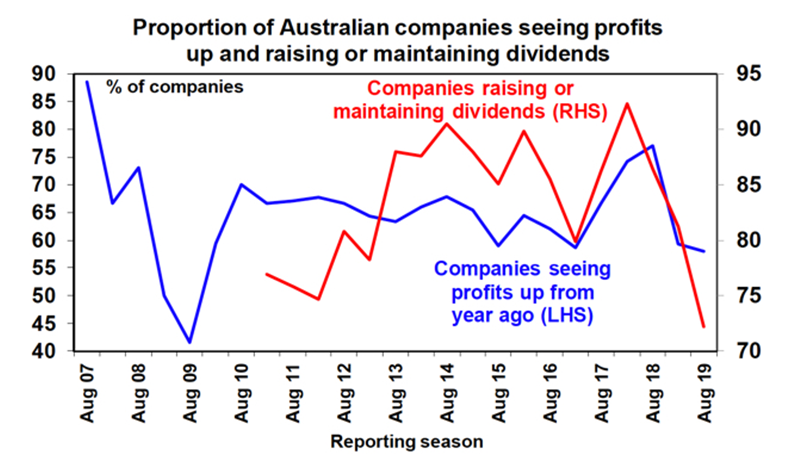 Slow growth but probably not recession

Since last year our view has been less upbeat on growth than the consensus and notably the RBA. This remains the case as the housing construction cycle turns down and weighs on consumer spending. As a result, it’s hard to see much progress in reducing high combined levels of unemployment and underemployment, and hence wages growth and inflation are likely to remain low. But there remains a bunch of positives that should help the economy avoid a recession even though growth will remain weak for a while yet. Here are nine. 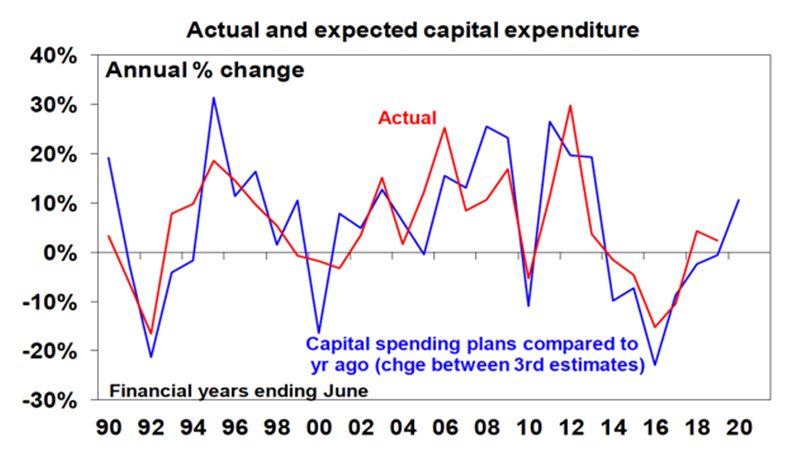 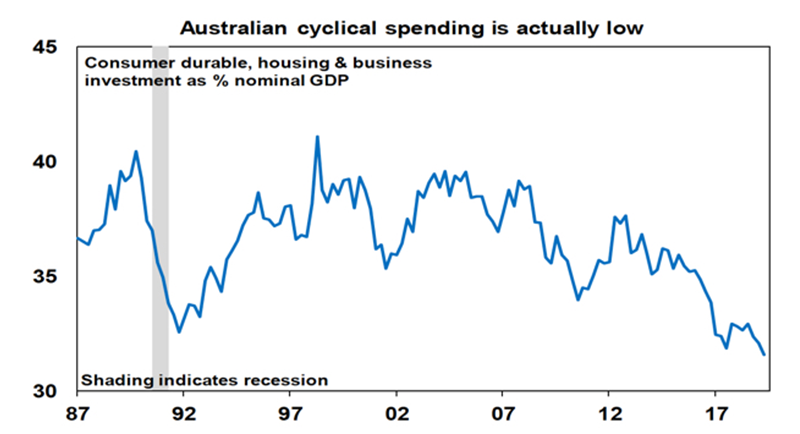 Our assessment remains that growth will remain soft and that the RBA will have to provide more stimulus – by taking the cash rate to around 0.5% and possibly consider unconventional monetary policy like quantitative easing. Ideally the latter should be combined with fiscal stimulus which would be fairer and more effective. While Australian growth is going through a rough patch with likely further to go, recession remains unlikely barring a significant global downturn.

Have you set things up to weather this trend?

If you need your personal situation reviewed by your SFP Planner or you don't have a planner yet, get in contact with us on 02 9328 0876.