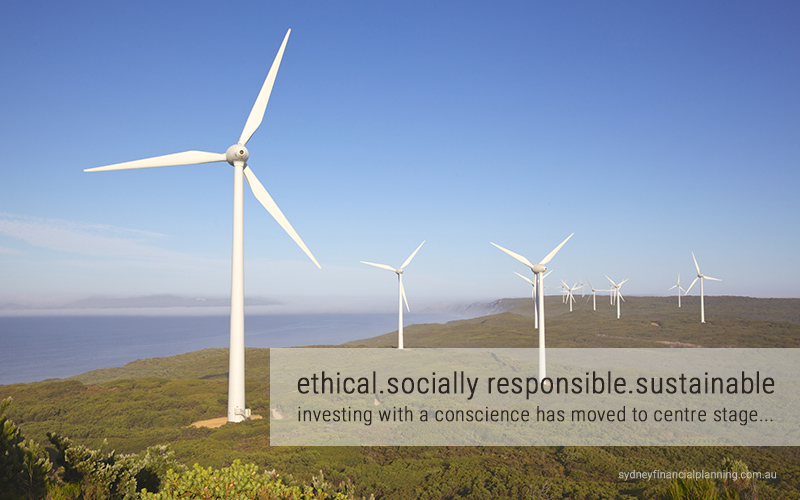 Once upon a time, the mantra of the ethical investor was morals before profits. Not surprisingly, ethical investing remained a niche market. But not anymore.

Ethical, socially responsible, sustainable: call it what you will, but investing with a conscience has moved to centre stage in the wake of the financial crisis as returns of the top ethical funds have kept pace, and in some cases, outpaced the market.

What is considered an ethical fund?

Managers of ethical funds use a variety of approaches to select stocks. Negative screening is used to weed out companies involved in armaments, tobacco, gambling, uranium, old growth logging, poor mining practices or questionable environment, social and governance (ESG) practices. Other funds look for sustainable-themed investments in areas such as clean energy, green technology or sustainable agriculture. In addition, positive or ‘best in sector’ screening allows investment in companies that perform well relative to their peers in their attempts to integrate ESG issues into their businesses.

Ethics back on the radar

The financial crisis of 2008 revealed failures of corporate governance and ethics on a global scale. At the same time, global population growth dramatically increased the need for clean fuel, clean water, food and other resources. As a result, governments, investors, employees and the community are demanding companies incorporate ESG issues into their business alongside the drive for profits. It is not just about being ‘green’ for the sake of it. Both the Financial Services Council and the Australian Council of Superannuation Investors advocate that companies which score highly on these measures are less risky and more likely to thrive in the challenging times ahead. This is because governments reward companies that make products and services perceived as being beneficial for society. Conversely, they penalise companies with unsustainable business models by imposing taxes and other forms of regulation, effectively reducing demand. One example of this is the regulation around carbon emissions, which adversely impact manufacturers relying too heavily on coal for energy.

Cigarettes are another obvious target. Governments heavily tax tobacco, ban advertising and even restrict smoking in public places. You don’t find governments regulating the sale of apples in the same way; either the crunchy or the computer type! Community activism can also bring about changes in corporate actions. As traditional energy sources become harder to find, non-conventional gas and oil exploration has become big business, even in Australia. A new technology to extract oil and gas from previously unreachable shale rock is known as ‘fracking’. Using high pressure water to fracture rock deep in the ground to release oil and gas, fracking has generated strong community opposition because of concerns about damage to water catchments and farmlands. The power of local communities has forced some Australian energy companies to put on hold their exploration applications that rely on fracking.

So is it as simple as black or white? Can a company be described as ethical or not? Sometimes in the case of large conglomerates, it can be hard to tell which side of ethical a company falls on. Woolworths, an Australian fresh food and grocery icon, sells liquor, cigarettes and controls over 11,000 pokies machines across the country. Its major competitor Coles also sells these so-called unethical products, while Coles’ parent company Wesfarmers has extensive investments in coal minesi.

It’s difficult to know where to draw the line as it seems ethics will always be a subjective field; most people agree it’s probably an ethical spectrum. While the definition of ethical companies might not be clear, ethics, social responsibility and sustainability are integral to doing business in the 21st century. Companies that get it right and investors who back them are likely to be winners in the investment stakes. If some recent investment returns are any guide, they already are.

If you want to discuss your super investment strategies why not book an appointment with one of our advisors. Call us to arrange an appointment on 02 9328 0876.

i The examples of Woolworths and Wesfarmers are for illustrative purposes only and do not constitute an investment recommendation, positive or negative in nature.