Sip Wine and Play Guitar with your Amigos 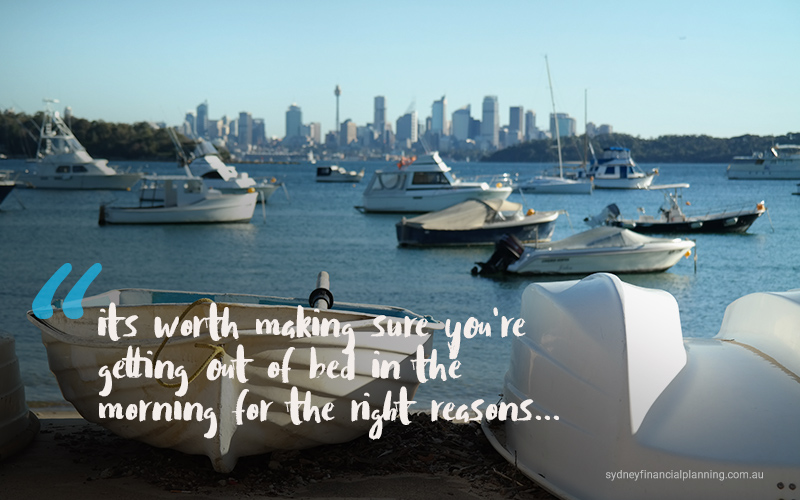 Do you know why you do what you do or are you just doing it…well, because?

“An American investment banker was taking a much-needed vacation in a small coastal Mexican village when a small boat with just one fisherman docked. The boat had several large, fresh fish in it.

The investment banker was impressed by the quality of the fish and asked the Mexican how long it took to catch them. The Mexican replied, “Only a little while.” The banker then asked why he didn’t stay out longer and catch more fish?

The Mexican fisherman replied he had enough to support his family’s immediate needs.

The American then asked “But what do you do with the rest of your time?”

The Mexican fisherman replied, “I sleep late, fish a little, play with my children, take siesta with my wife, stroll into the village each evening where I sip wine and play guitar with my amigos: I have a full and busy life, señor.”

The investment banker scoffed, “I am an Ivy League MBA, and I could help you. You could spend more time fishing and with the proceeds buy a bigger boat, and with the proceeds from the bigger boat you could buy several boats until eventually you would have a whole fleet of fishing boats. Instead of selling your catch to the middleman you could sell directly to the processor, eventually opening your own cannery. You could control the product, processing and distribution.”

Then he added, “Of course, you would need to leave this small coastal fishing village and move to Mexico City where you would run your growing enterprise.”

The Mexican fisherman asked, “But señor, how long will this all take?”

“But what then?” asked the Mexican.

The American laughed and said, “That’s the best part. When the time is right you would announce an IPO and sell your company stock to the public and become very rich. You could make millions.”

“Millions, señor? Then what?”

To which the investment banker replied, “Then you would retire. You could move to a small coastal fishing village where you would sleep late, fish a little, play with your kids, take siesta with your wife, stroll to the village in the evenings where you could sip wine and play your guitar with your amigos.”

Not a bad, eh? but what did you take away from it? Most people will think in one of three ways;

The “I’m running away” scenario – “screw it, work’s s**t, I’m packing my bags, moving to Mexico and chillin’ out with my guitar playing Amigos”

It’s the stuff travel blogs are made of but in reality you’re probably not going to do it and TBH, it might be good for a few months but in the end you’re still living in Mexico, alone, with  no source of income and you can’t fish.

The “hard work’s for suckers” scenario – “This Mexican fellow is on the money. I’m just going to do enough work to pay the two bills I have, feed myself and spend the rest on wine. The simple life”

Now don’t get me wrong, the simple life has it’s place in your 20’s but even Paris and Nicole couldn’t keep it up forever. Although you’re living the dream now, later on you may want to have children, explore the world or live by the beach but unfortunately, due to that cushy lifestyle you’ve been having some of those thing may now be out of reach.

The “I’m doing me” scenario – “I don’t care what people expect of me, what they want me to achieve or what they think I should be doing. I’m going to focus on the things that make me happy and live my life for me”

This way of thinking is the hardest. Everyday we’re told what to buy, how to act, what to wear, where to live blah blah blah but do we every stop to think why? Why did you buy those $200 sneakers? Did it really make you happy? Did you post them on Instagram for yourself or to boast to your peers? Did you get the amount of likes you were hoping for? Happy now?… We’re all guilty at some stage or another because that’s how the human mind is wired. Small reward now over big reward later. For me it often goes, donut now or beach body in summer? 9 times out of 10 the donut is in and around my mouth. Working towards a large goal that will truly make you happy is hard thing to do, it requires focus and discipline but the more time and money spent on the small rewards, the further away those real goals become. Most of the time, the the answer isn’t making more money, it’s making sure that the money you have is being used to support a life you truly want to live.

Maybe your dream is to live on a beach in Mexico for the rest of your days playing guitar and drinking wine with your amigos, but if it is, what have you done about it today?

Have some bigger goals you want to plan for?

It can really help to create a financial roadmap with the help of a professional. Why not call us to arrange an appointment on 02 9328 0876.

Come visit us by appointment at one of our four office locations.